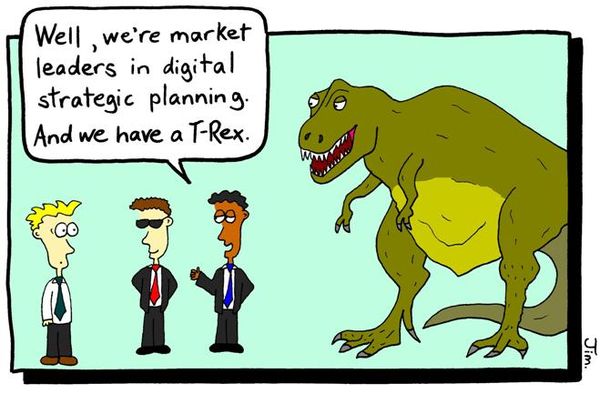 Had a cool time today hanging out and working at the Biz Dojo in Auckland. A very cool, very friendly bunch of creative business people, sharing an office space, interactions, energy and dreams. In other words, a great crucible for cartoon ideas!

The above cartoon was inspired partly by a recent viewing of Jurassic Park, and partly by chatting with the directors of this company. Two young guys, in the early days of their start-up, with a clear vision for making their own little dent in the universe.

It reminded me of this article, which reflects on the story of Chris Hadfield, the 53 year old Canadian astronaut who became an international celebrity thanks to his tweets and communications from space. His key piece of advice? "Don't let life randomly kick you into the adult you don't want to become."

Biz Dojo felt to me like a room full of people doing just that; that is, taking the reins of their own dreams and creating something new. That feeling - creating something from nothing - is like bringing a T-Rex to life from extinct DNA; it's challenging, thrilling, and just a little bit scary. But if it can be achieved, you have an awesomely cool T-Rex.

To put it simply, there's nothing more awesome to me than human creativity. So get out there and create.