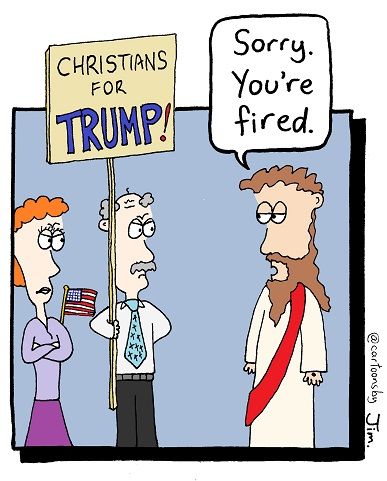 Let me say this … I actually don’t think Donald Trump will get to be President of the USA. There are too many smart people in the US who understand the seriousness required for the presidency to let a racist, divisive demagogue take control of the White House. This is the same bunch of people that voted in Barack Obama twice, after all. That was a good call, USA.

That said, I can see Trump becoming the Republican nominee. But if that happens, I expect it will be the end of the GOP. Again it’s an issue of being taken seriously. How could the Republican Party ever look anyone in the face again after handing over the reins to such a vile person?

But of course, there’s his support base. It astonishes me that there are people who call themselves Christian in the US and support Donald Trump – yet there are many of them. If they can’t see how his views are at complete odds with those of genuine Christianity, then they betray the very One they claim to believe in and follow.

I hope Bernie Sanders gets to be the Democratic Party nominee. If he doesn’t, then it will be Hillary Clinton, and she would be a good choice too – although I think she would face the tougher battle at an election. (Too much Clinton baggage.)

Whatever the outcome, it’s going to be an interesting year ahead. But mark my words, Donald Trump will not become President of the USA. God forbid.