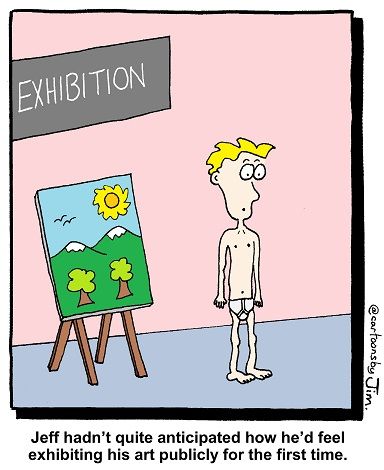 Last weekend, I was one of about 90 “artists” who gathered at the Aotea Centre in Auckland’s city centre for the Chromacon 2015 Indie Arts Festival. (Please note … When I put “artists" in quotes, as above, it’s referring to my own comparative lack of artistic ability.)

It was a huge lot of fun, and I got to meet some amazing comic illustrators for the first time, and caught up with a bunch of others I’ve known for a long time. But in between those collegial moments, the above cartoon was pretty much how I was feeling most of the time. While I know plenty of people have seen my cartoons before, there is nothing that quite compares to having someone stare at one's attempts at humour while you are sitting right there in front of it.

The reactions were many and varied. Thankfully, the majority were laughs, but there was the occasional stony face that glanced, read and then sauntered off, clearly unmoved. The scariest was the old lady with pursed lips who stopped and picked a copy of my book of ‘(sac)religious’ cartoons then flipped through the pages with a disapproving scowl on her face before dropping it back on the table and striding away, having made not a nano-second of eye contact. Yikes.

Of course my favourites were the ones who approached with blank stares, then broke out in chuckles as they pointed the particular cartoon out to a friend or accompanying family member. Those were the golden moments that made me realise why I enjoy drawing cartoons.

It’s the moments of connection that I long for. This joke formulates in my brain, I put it on paper, then someone looks at it and laughs. It’s now in their brain. There’s something simple and magical in that transaction, and the best bit is that in that moment of my nakedness, I don’t feel self-conscious anymore. Because everyone is naked at that point. We’ve effectively returned to the Garden of Eden, to an unsullied place of spiritual connection between the human and divine.

I’m not sure if the other artists at Chromacon felt the same way, but there was certainly a lot of creativity going on in that room that day. If that isn’t something divine, I don’t know what is.