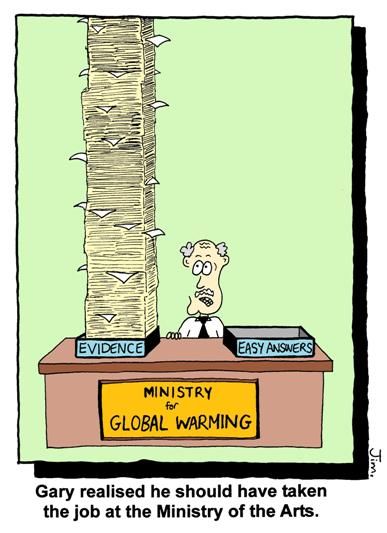 This week I unexpectedly found myself in conversation with a global warming skeptic.

Dressed in a fine suit and sipping a wine, and apropos my mention of one of my PR clients, he became immediately evangelical about how the “jury was still out” on whether climate change was in fact a problem.

It was at the end of a long day and I'd already had a couple wines myself, so my brain was not fully engaged to respond. I did ask him if he really thought that pollution produced by human activity had no appreciable impact on the planet.

He pulled up a bit and said that of course that was a bad thing and we shouldn't do it, but that the planet was still naturally coming out of an ice age anyway and that human beings weren't really making a difference. He demonstrated his viewpoint by exhaling a sharp breath and saying, “That was carbon dioxide. That's supposed to be a big problem?”

It is fascinating to me that views like this are still out there. I drew the above cartoon about six years ago, around the time Al Gore's documentary 'An Inconvenient Truth' was released. That film not only stirred a world to think seriously about how climate change was affecting the planet, it also whipped up a debate that is still going on today.

I can totally understand why. The global warming process, as described by scientists, is so slow in comparison to the rest of our lives that its impact is not felt in the same way as an earthquake or other more immediate disaster. Even the floods that have hit this part of the world in recent months don't seem like they are really connected to it, even though research findings like this indicate otherwise.

As this cartoon suggests, there are no easy answers to global warming, but it is still vitally important to pursue them. In our fleetingly short human lives, it can feel like the Big Picture is just too big to gain any real perspective.

Coincidentally, today's feature article on Wikipedia is about one odd perspective on a response to climate change; the Voluntary Human Extinction Movement. While the followers of this extreme viewpoint do seem to be quite sane and serious, it comes across to me as being something of an exercise in satire and performance art. That, like cartoons, can – in itself – be instructional.

It will be interesting to look at this little picture again in another five, ten and twenty five years and see how the Big Picture has changed. I'm fully expecting it to be even gloomier, especially if viewpoints like the one of my wine-quaffing interlocutor become more prevalent. I just hope we can keep talking about it, and more importantly, doing something about it.

There's no easy answer to what that is, but I do know that if humanity is smart enough to work out how to create the sort of technology that we have access to today, we can certainly find a way to make sure that it runs better, cleaner and more efficiently.

That's a Big Picture that's worth at least attempting to draw.