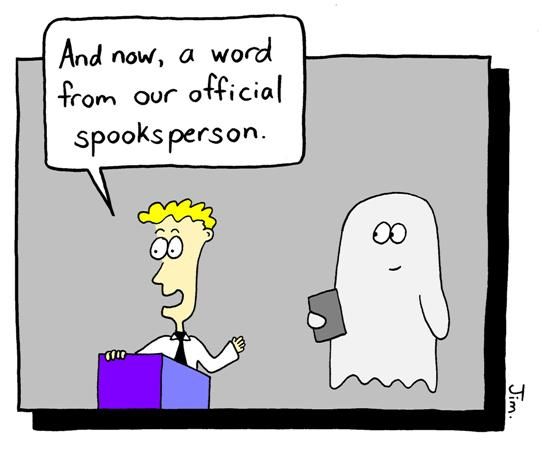 Ah, I love a good pun. Or a bad one. In fact, any joke, headline or turn of phrase that plays with words in a humorous way is almost always guaranteed to bring a smile to my face.

The above cartoon was one I originally did for a Halloween greeting card a few years back. It was commissioned on short notice, and all that I could come up with at the time.

I do like it, but I discovered not long after that the joke had been done before and, not surprisingly, in a variety of ways. (Google ‘spooksperson’ and see for yourself) While this was my “original” version of the idea, it’s hardly an original idea.

Still, that’s the case for a lot of jokes. I’ve just finished reading a fantastic book called 'The Naked Jape: Uncovering the Hidden World of Jokes', which was co-written by one of the most successful modern British comedians, and one of my favourites, Jimmy Carr, who is a frequent punster.

It’s mostly about the art of the spoken joke (and stand-up comedy in particular) but I'm reading plenty that's applicable to cartooning as well.

There's discussion of the science of laughter – physiology, psychology, neuroscience, evolutionary theory plus an intriguing political history of the clown – which is all fascinating, and made less drab than it sounds by including plenty truly hilarious jokes amidst the academia.

The authors explore the extremes of humour, from gender-based jokes, to ethnic and religious jokes, the latter of which had particular resonance for me as Jimmy describes himself as a self-confessed recovering fundamentalist. (Read this in case you need some background on my own story on that.)

There’s so much great reflection and discussion on humour in this, I felt a bit drunk with all the great stuff I read, so it’s hard to pick a favourite quote, but here’s just one that grabbed me:

Laughter is indeed a serious business. It’s a practice which finds the measure of our humanity. Laughter sets us going, marks the real beginning of our journey. If we’re lucky, we count on it as a constant companion – for richer, for poorer, in sickness and in health. If we’re very, very lucky, laughter book ends our lives.

That gives me great inspiration as a cartoonist. It makes me feel less annoyed about discovering a joke I thought up had already been done in another way by another humorist, and accept that I am – like you are – part of the global collective consciousness that finds life inherently funny. But damn it, I’m still going to keep questing for that truly original joke till the day I die.

Until then, I’ll keeping reveling in the serious joy generated by master punsters like this one, a Mr Tim Vine, who recently won the second best joke prize at the 2011 Edinburgh Comedy Fringe with this gem:

“Crime in multi-storey car parks. That’s wrong on so many different levels.”