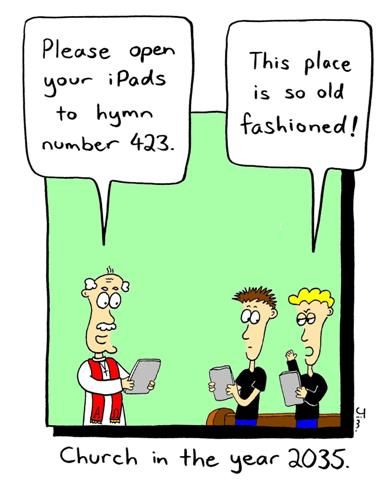 I found out today through the illustrious editor of Touchstone magazine, Paul Titus, that the above cartoon won the Bronze Award in the Humour category at the Australasian Religious Press Association’s 2011 awards that were held in Australia over the weekend.

Judges comments were as follows: “Topical, dry and very realistic. This ‘toon shows that working with youth will always take a bit of extra effort, and that being relevant doesn’t just come with keeping up with technology.”

Aw. Aint that special. Jim’s first ever award. Made me feel a bit fuzzy inside today, I must admit.

Thanks Paul! You’re an awesome editor. (Congrats too for your a Silver ARPA Award for the excellent feature article on Prostitution Law Reform.) It’s great to be able to cartoon for a church magazine that isn’t afraid to tackle the big issues so fearlessly, and still retain the ability to not take itself too seriously.