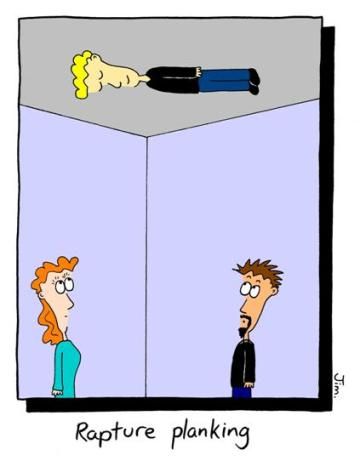 Fads, memes – call them what you will – are a very human thing. We’re suckers for novelty. Take planking. It made the front page news in New Zealand this week. Last week it was the ill-fated Rapture predictions of Harold Camping. Naturally it seemed a fitting thing to combine them in the above cartoon.

It’s fascinating to me how these two things have lit up the web. Planking amuses me simply because it strikes me as a very low-brow form of performance art. (As one who did performance art as a study and a hobby for several years, I feel I can comment with some authority on that.)

The Rapture response encourages me more than anything though, because it shows that humanity on the whole doesn’t seem to be as beholden to the ravings of religious lunatics as much as it perhaps used to be. The predictions received the ridicule they deserved, pounding another nail into the coffin of such religious superstition. (As one who was also inclined to believe in ‘End Times’ mumbo-jumbo at one point in my life, I definitely feel qualified to comment on that as well.)

General psychology suggests we follow fads for emotional excitement, peer pressure or because it’s perceived to be counter-cultural. That’s funny. It sounds a lot like my experience of church for the first 30 years of my life.

Not that it was all bad though. I made a lot of friends, many that I still have. However, some who knew me in my younger days might be either surprised or concerned that I’m reading and enjoying books by Richard Dawkins and Christopher Hitchens these days.

To tie this back to cartoons (as is my wont in this self-indulgent blog), I suppose cartooning is one thing that has been a constant for me in my life, even when I was a fundamentalist teenager. Humour, especially in cartoons, provided much of the real meaning in life for me, and still does.

I had reason to reflect on that again this week when I read online the obituary for the man who edited the book ‘No Mean Feat’, a collection of cartoons that featured some cartoons of mine when I was a teenager. That experience was one of the most memorable of my life, and a large part of the reason I am still cartooning today.

I had had some email correspondence with Bill Robbins back in 2007 when my ‘Gone Astray’ book was published and I had listed him in the acknowledgements. It was great to renew the connection at the time, and I’d hoped we could keep in touch. To look him up online again and discover that, unbeknownst to me, he had died of cancer at the relatively young age of 55 two years ago was saddening – not just for the fact that a warm, creative man I once knew had died – but that I had not made the effort to get to know him better and stay connected.

To come full circle to where I began this (now overlong) post, I think I realize now why humans love fads. They are a simple, humour-filled way to connect to others. Not necessarily – nor importantly – an entirely deep and meaningful way, but a simple and enjoyable one.  That’s all we need to keep going sometimes. That moment of recognition is a human sharing that reminds us that we are all in the same boat on this planet, and the most meaningful thing we have is each other.

The fact that we will all plank on our deathbed someday, should be inspiration enough to get out and connect with those old friends and people we love before it’s too late - even if it’s emailing them a link to the latest Internet meme as a starter.

If the world really was to end and we all started planking involuntarily, wouldn’t it be great to go out with a collective smile on our faces?