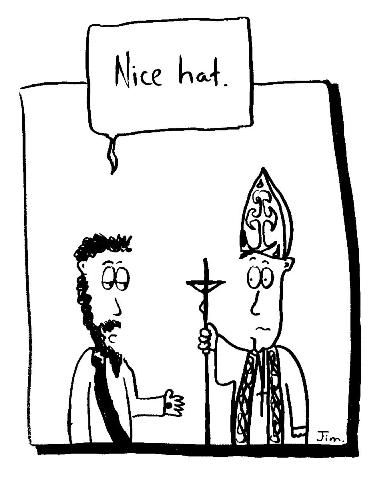 Ever heard of a singer called Joseph Arthur? Probably not. He's one of those gloriously obscure singers who doesn't seem to care how "huge" he is, but just keeps developing his art, releasing album after superb album of the most beautiful, soulful music I have ever heard. Prolific. That's the word. Not only is he releasing four EPs and a full length album this year, after releasing two last year, there always seem to be new songs appearing on movie soundtracks and on his web site. Now I see he's creating an ongoing, ever growing never ending album of music on another web site. And it's all gold. I feel a massive wave of love every time I hear it. I can hardly express how much it affects me. Reminds me of Jack Spong's motto, "Love wastefully." Joe plays 'wastefully'. He's amazing. Then I stop and look at my cartoon output. Seems a bit sparse in comparison. I'm not prolific. I know some famous writers were prolific (eg. Victor Hugo writing 90 pages of prose a day, including the masterpiece 'Les Miserables', vs. Harper Lee, 'To Kill a Mockingbird'. One great book, and call it a day.) All I can hope is that when I do squeeze a cartoon out, it's been worth the ink. Even if it isn't, I can still listen to Joseph Arthur while I draw! Now, go check out his web site! http://www.josepharthur.com

"Religion is a gimmick; We want back the God they stole." (Joseph Arthur, All of Our Hands)