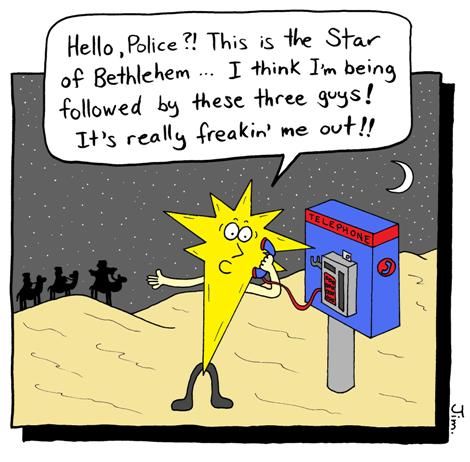 This cartoon - or 'startoon' as I like to call it – has been good to me. The original cartoon is not the one drawn above. It was first done in black and white, and has an interesting story.

I remember exactly where I was when I thought of it. I was stepping onto a train in Adelaide, going to work one morning in November 1997 and it popped fully formed into my head. When people ask me the question that most cartoonists get asked – ie. Where do you get your ideas from? - I mention this moment because it was one of those rare moments when the idea just arrives. Mostly it takes much longer than that, but I got lucky with this one.

It was first published in The Lutheran magazine that same year, and I also used it for personal Christmas cards. The response was great. Lots of laughs. Result!

This was also around the time I first got an email address. It was the days before Facebook and Twitter so funny stuff was sent via emails. It was cool one day to get a viral email from someone a saying 'Hey, thought you would like this cartoon!' Not often you can reply and say, 'Yeah. I drew that.'

A few years later, I submitted it to US magazine The Wittenburg Door (now-defunct, but at the time was popular as the "pretty much only" religious satire magazine around) which published it, making it my first internationally published cartoon. They also put it on their web site, which also made it my first cartoon published online.

A few years later again, I used it for my first solo published book, Gone Astray. I still get comments from people who read that saying it's one of their favourites in there.

Just last month I received a request from an church that wanted to use it for their weekly bulletin, so since it is the season, I thought it was high time for a re-draw. Hopefully it will bring a laugh or two again this year.

With one week to go till 'Christmehs', redrawing it has helped me start to get into the spirit of the season. In the spirit of that, you can – for a limited time – purchase a copy of my book 'Gone Astray: A Collection of (Sac)religious Cartoons by Jim' and get a second copy absolutely free! Click here to order. Eighty 'vintage' Jim cartoons (including the original of the Startoon) in one book, which has been nicely reviewed in a few places. Makes a great gift. :-)