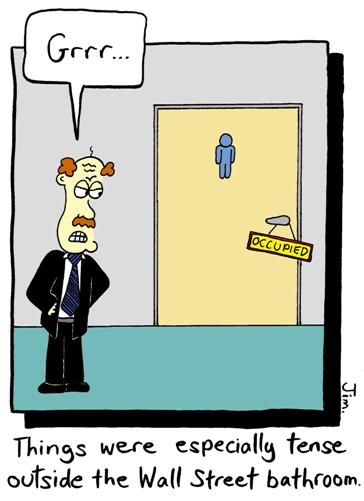 The conservative US media, which seems to make the loudest noise - loud enough anyway to echo all the way to little old New Zealand - portrays the Occupy Wall Street protestors as having no clear message. Nothing could be further from the truth in my opinion.

I think their message is as simple as can be, and I've seen it encapsulated best in a cartoon. Not my silly take on the movement, as depicted above, but this one.

At last count, I think I've drawn at least three cartoons over the past three years mocking the bailouts, and the longer the OWS protestors aren't heeded, I'm sure it won't be the last.

So occupy away, occupiers. And make sure you occupy those Wall Street bathrooms too. If that happens, those who caused this whole thing might start to realize just how full of sh*t their greedy practices are.