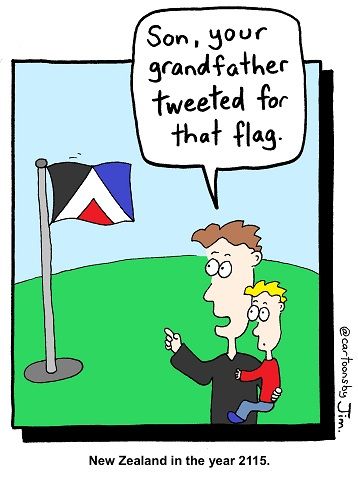 Anyone living in New Zealand this year will have got wind of the fact that we’re currently looking at options for choosing a new flag. And like some kinds of wind, the whole process has started to smell a bit.

From the outset, having the Prime Minister instigate a referendum on changing the flag when there was no significantly compelling reason to do so – apart from the occasional embarrassment of having the Australian flag substituted for the NZ flag at sporting competitions and the like – and also while there are many more compelling issues (poverty, refugees, the TPPA, etc) and more crucial uses for the money being used to administer the whole process – certainly has an odour to it.

Secondly, having a panel of judges decide from a list of 10,000 which final 40 flag designs will be considered without someone with actual design or vexillology skills sitting on that panel – and then coming to a conclusion that the only four options that will be considered are all variations on a fern – which, coincidentally, is the Prime Minister’s preference – seems even more on the nose.

But now, in the midst of all that stink, a flag design that was dismissed by the panel has blown back into the public consciousness and captured the minds of a significant percentage of the New Zealand’s population – or at least those who are on social media. It’s a simple design people are calling ‘Red Peak’ and it’s been like a breath of fresh air in the whole fetid swamp of this process.

I overlooked it on first glance. It seemed almost too simple. However, after reading more about the creative process of the designer Aaron Dustin, and the thought and consideration that went into its imagery, and then looking at it with the intention of finding my own meaning in it – as we must do for all images – I realised that I’d fallen in love with it.

I see the Land of the Long White cloud in Red Peak, the same country that welcomed me so warmly 17 years ago. I see snow covered mountains, which form part of the landscape here that I love. Beneath that is the red glow of the geothermal activity that beats deep in the heart of the land here and bursts through to the surface in so many places, providing energy and industry.

The dash of black on Red Peak acknowledges for me the role that the colour black has played in the New Zealand sporting identity, which – like it or not – is an important part of this nation’s psyche. I also see a nod to the past in the colours and the angles that resemble a close up of the Union Jack. And yet I also see the patterns of traditional Maori tukutuku in the triangle design.

Essentially, it’s a design that resonates with my experience living in New Zealand, and I would be proud to see it flying as a representation of this country that I live in and love so much. However, Red Peak is not on the official flag short list, and short of a law change (which is possible, apparently) it’s not going to be. That seems a shame.

As an Australian who has now lived in New Zealand for almost 17 years, I’ve been well aware of the mix-ups that happen between the two flags of my country of birth and now my country of residence. Both are part of my identity, and yet both seemed to be clinging to a bygone era that’s all about empire and colonisation.

Which brings me to the above cartoon. It’s clearly a nod to those who do not want to change the flag at all for historical reasons. They want to keep the old flag because people fought and died under it, and I completely honour that reason. I agree that we shouldn't just change the flag without taking that history into account, and if we can’t find one that does, then we shouldn't do it. However, Red Peak does acknowledge that history, in my view at least.

I also like to think that Red Peak is a representation of the fact that New Zealand today is a society that does not have to fight wars of empire anymore, and that it is a precious thing to be living in a country where we have the freedom to freely express ourselves – on Twitter and elsewhere - and fight for things like what flag best represents our common, yet multicultural, identity.

If nothing else, Red Peak is a reminder that identity matters, and if we don’t take a stand for defining that ourselves, someone else will do it for us.

So let’s not get blown about by random winds of change. Let’s run Red Peak up the flag pole and see who salutes.