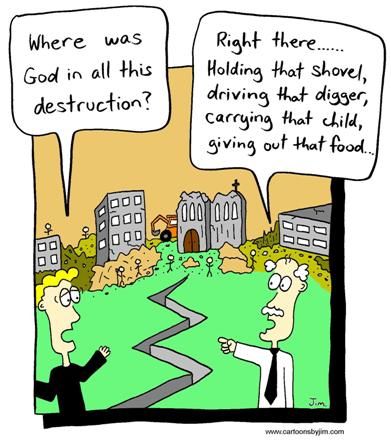 It might say something for my current state of mind that I'm reading Michael Dobbs' book "One Minute to Midnight" for relaxation these days. It's a blow-by-blow account of the Cuban missile crisis, from all points of view - American, Russian and Cuban. If ever I'm feeling stressed - and there's been quite a bit so far this year - I just think how JFK must have felt over those thirteen days, with the potential destruction of the world by nuclear war closer than it's possibly ever been.

Still, who needs nukes? It's felt like the world has gone into self-destruct mode this year. Be it floods, tsunamis, tornados or earthquakes it seems like the planet has it in for us. Acts of God, they used to be called. And yet, from what I've seen of the human response, it seems that in the midst of it all, we're starting to realise that the real acts of God are not the ones that come from without in the form of destruction, but the ones that come from within that show care and love for people in need.

It's a sense that inspired the above cartoon about the Christchurch earthquake. When I first completed it, I thought it was fairly ordinary, but the number of people who've seen it since and responded enthusiastically to it has surprised me. They've been from all walks of life and spiritual journeys ... progressives, Pentecostals, Catholics, atheists ... all have seen a truth in it.

As New Zealand continues to creak and crunch with daily tremors and powerful winds, I'm keeping an eye out for more Acts of God. Not from the ground below or the sky above, but in the eyes and hands of people everywhere who are bringing God into being every day through their care for each other.