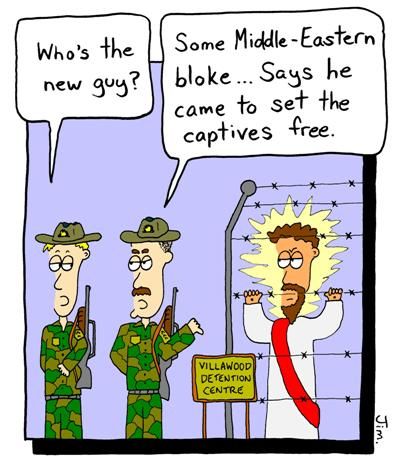 It was UN World Refugee Day earlier this week, and an editor friend in Australia asked me for a cartoon on the topic. This is what fell out of my brain.

As an Aussie who has lived in New Zealand for a full third of my life now, I don’t feel as close to this issue as I might if I was still living back across the ditch, apart from a sense of shame and revulsion at the racism that still appears to be so clearly engrained in much of Australian society.

New Zealand sometimes seems like a virtual utopia in comparison, considering the news that has floated across from my homeland over the years – Cronulla race riots, mandatory detention centres and ‘Stop the boats’ political campaign slogans – to name a few that have made me shudder.

Still it seems that hope for redeeming the racist part of the Australian soul might be springing anew in the form of a reality TV show, of all things.

‘Go Back To Where You Came From’ has been stirring discussion in the news lately, as it puts a bunch of everyday Australians through the refugee experience and captures it all live on camera. For all the contrivances that obviously go with reality television, apparently, it’s powerful stuff if this review is anything to go by.

As one who was freed from the mental captivity of religious fundamentalism, I can imagine what it might feel like for a xenophobic to come to a new understanding of themselves and those they once hated. Essentially, it’s the feeling that comes with being released from fear into love.

It’s what the Jesus story is all about too – which is why I’ve put him behind the fence at Villawood. (With a case of leprosy having been discovered there last week, I think he’ll be needed – along with the antibiotics that can treat it.)

Meanwhile, do check out the UN web page on World Refugee Day and if you’re reading this in Australia, sign this petition for me!