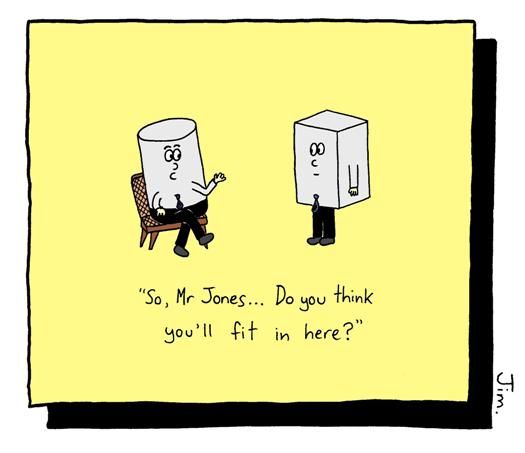 Wow, it's been a busy week and weekend. Posting this cartoon a little later than usual as a result. It's actually one that I drew well over a decade ago and have spruced up a little here.

It's interesting to look at it again now after all this time. At the time I drew it, I think I was feeling a little like nervous Mr Jones here, hoping for some big break. I've definitely felt like the square peg more than once in my life.

But that's the thing ... I like square pegs. Tell me about a musician whose songs are not quite palatable for mainstream radio, and I'll want to have a listen. Show me a movie which doesn't adhere to standard Hollywood formulae, and I'll probably want to watch it right to the end of the credits. Introduce me to someone new, and I'll secretly be hoping there'll be something quirky about them that they'll be willing to share.

So, be edgy. Be niche. Be off the radar. Be a square peg. It's bound to be more exciting than just following the round-holey club.

Here's to not fitting in!