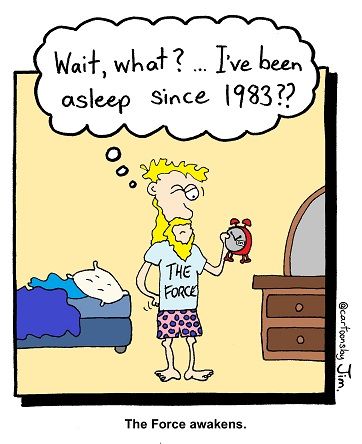 This cartoon is a bit late, as Star Wars – Episode 7: The Force Awakens was released last month. Fair enough though, I reckon. Lucasfilm were running very late with releasing a decent new episode in the series anyway. (Zing!)

So I saw The Force Awakens one week after it was released, and it was a damn fine watch. Like many, I was captivated by the original trilogy, the first of which (Episode 4: A New Hope) I was too young to go see in the cinema, but VHS tape made up for that. I barely remember seeing Episode 5: The Empire Strikes Back in the cinema, but boy do I remember seeing Episode 6: Return of the Jedi. I had won tickets to it by breathing like Darth Vader at a shopping centre which was doing a promo. I also won a vinyl LP soundtrack of the movie that day. So – again, like so many others - the spectacle and story of these films were imprinted indelibly on my brain since boyhood.

Then came 1999 and the release of Episode 1: The Phantom Menace. Then 2002 with Episode 2: Attack of the Clones. Then 2005 with Episode 3: Revenge of the Sith. Three films that should have been awesome, but weren’t. And I mean SO weren’t. So much so that today I acknowledge they exist, but I have vowed to never own them and will do everything I can to avoid watching them ever again. (I may give the Machete Order a try some day, but it’ll be with enduring resentment in my heart.)

But back to the new film. The Force Awakens was a joy to watch, and certainly felt like a real Star Wars film, with the same soul of what was there in Return of the Jedi. What I last felt in 1983 has truly awoken again in me, hence the cartoon.

Of course, I always reflect on the parallels of what I cartoon about with my own cartooning journey. I am aiming for this year to be a similar re-awakening for my cartooning after a tough 2015, with some new projects in planning to come to fruition as soon as I can manage them. Do stay tuned for more on that, and pass the time till then with many joyous re-watches of your own of The Force Awakens.

Because, if we can’t just sit back and enjoy the Story of life once in a while, what is the point?