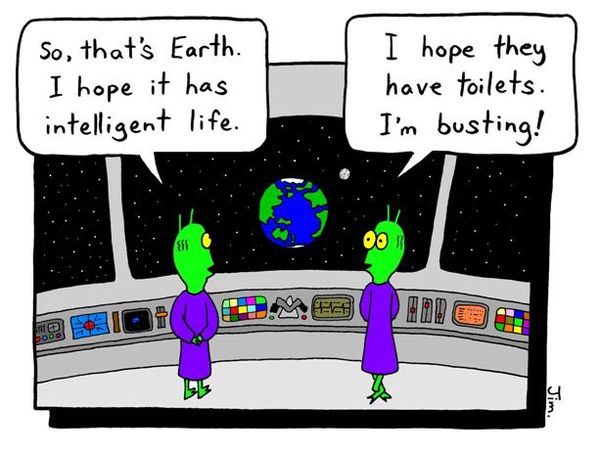 I like to have my favourite old movies on as I draw. It helps me focus and makes the lines run straighter for some reason. Most often I put on Peter Jackson’s remake of King Kong, but for the above cartoon it was Aliens, appropriately. Now there’s a movie that will never need a remake.

The above cartoon is a remake. I first drew it 20 years ago. (Click here for the original.) For years I considered it my best ever idea. You really can’t go wrong mixing sci-fi and toilet humour. As far as remakes go, it’s definitely topped the original. I have my son to thank for the superb colouring job.

Meanwhile, I turned 37 this week. As a birthday present to myself, I purchased the 20th Anniversary edition of Nirvana’s 1991 album ‘Nevermind’. I hadn’t listened to in full since 1993. Spinning it again after so long, I felt old and young again simultaneously. It still sounds as great as it did back then.

It’s good to know that some 20 year old ideas still work after 20 years. I’m happy about this cartoon. Sad about Mr Cobain though. He probably had lots more good ideas in him.