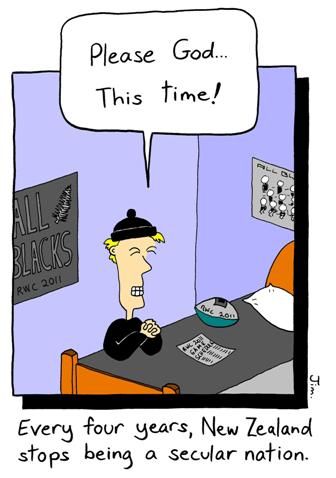 I’ll come clean. I’m an Australian who barracks for the All Blacks.

When it comes to rugby, I’m a dead-set traitor to my country of origin’s team. A Wallaby infidel, if you will.  I couldn’t name you a single player on the Aussie team if you tortured me. It’s not for any ideological reason. I wasn’t into rugby in the slightest when I moved to New Zealand 12 years ago, but I’ve since found I’ve become an All Black fan by way of immersion therapy.

It’s hard to avoid the All Blacks in New Zealand. You can’t eat breakfast, open a newspaper, turn the TV on or walk down the street without seeing an All Black jersey fronting up to sponsor a product on a billboard, screen or print ad. In fact we probably see more of the All Black players’ armpits, thighs and bulging pectoral muscles on a daily basis than we do those of our nearest and dearest.

Aside from their ubiquity in the media, you also can’t swing a dead cat around your head at any major product launch without hitting one of the boys in black in the face. I rarely met any Australian Rules Football player when I lived in Melbourne (apart from one bizarre, random meeting with legendary Geelong player Gary Ablett) but I must have met at least a dozen All Blacks over the years, and been within spitting distance of many others at this or that event.

What’s been more fascinating, however, is to see just how personally this country takes their rugby. If the All Blacks are doing well, New Zealanders seem to feel good about themselves. If they aren’t , Kiwis tend to get a bit grumpy, self-conscious and fidgety about their place in this world.

And then there’s the World Cup. Crikey. I was here in 1999, 2003 and 2007 and witnessed the sackcloth-and-ashes mourning first hand when the All Blacks didn’t win or, let alone, make it to the final. And now we are hosting the Rugby World Cup in New Zealand. God help us. Literally.

As a PR consultant, the RWC has been a consideration for almost every piece of activity that I’ve been involved in or planned for this year. Seeing all that up close, I’m certain that amidst the non-stop hoo-haa of planned events, crazy ad-campaigns and PR stunts, Kiwis are turning their eyes to heaven and pleading with whatever almighty deity they can envision that the grand prize will be won by this beloved All Black team this time.

While it’s ultimately a bit silly to make such a fuss over a game of football, I must admit I’ve found that I can’t help but get caught up in the All Black fervor. For me, it starts with the colour. Black. It’s inherently cool. Anything that has its coolness measured is compared to black; ie. It’s the ‘new black’. It’s unrelenting. Definitive. Earthy. Primal. That’s hard not to love.

Then there’s the haka before each game. God, I love the haka. It makes the hair on the back of my neck stand up. It’s a primal thing again, and maybe something you can appreciate best if New Zealand has ever been your home for any length of time. It goes beyond words. Just watch this and tell me that isn’t true.

Then there’s the game. While I can pretty much take or leave the sport, because to be honest I don’t really understand the rules, it’s fun to watch the mock brutality of it nevertheless.

What I have come to understand though is the love New Zealand has for the game. And love makes you do silly things. It makes you believe things are going to be great, even when the outcome could be affected by any one of a million things. That love makes us believe we can win each and every time.

Of course, as we’ve seen from the past few RWC’s (cue the ‘choker’ jokes), though the love from New Zealand will still be there if the All Blacks don’t win the Cup this time, they might not be on speaking terms for a long while. They’ll get over it though. We always do.

And there it is. That’s love.

So, all the best guys, and know that there's at least one Aussie out there who is proud to admit, like the rest of New Zealand, that he'll always love the All Blacks.